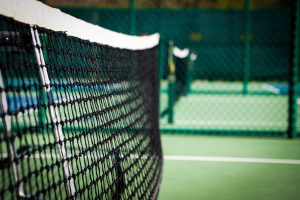 Tennis has long been linked with setting the style agenda for decades, and we don’t just mean the pros on centre court or those sipping Pimm’s from the best seats in the house. A surprising number of Wimbledon stars and ex-champs have also taken centre-stage on the catwalk.

Yes, many legends have gone on to prove their style and poise could make the leap from SW19 courtcraft, to the walkways of Paris, Milan & New York.

Rather than opting for the usual latter year careers of coaching, ambassadorial roles or the obvious sports punditry, A select bunch went on to become aces of Men’s fashion.

Here’s DFO’s mini guide to four awesome clothing brands that owe their creation and originality to tennis heroes of yester-year.

The player: In the 1920’s René Lacoste won and incredible seven grand slam titles, including multiple victories at our very own Wimbledon, (as well as the French and US Opens). Rene Lacoste never took on the Australian Open, choosing never to enter it, (perhaps not a travel fan)

The brand: Rene, being known for his tenacity on court, was nicknamed the crocodile. once his playing days were behind him, Lacoste developed his reptilian trademark into an iconic fashion emblem, adding it to tops, caps and shoes in a range of bold tones. The classic Lacoste polo shirt in bold colours or rich pastel shades has evolved to become a staple wardrobe piece for many, symbolising a certain preppy chic.

The player: In the 1930’s, Stockport’s favourite son, Fred Perry dominated top level Tennis. As well as taking three Wimbledon titles, he secured the full grand-slam sweep, winning the French, US & Australian opens. Until Andy Murray reverse decades of hurt in 2013, our Fred was the last brit to lift the Wimbledon crown.

The brand: The instantly recognisable laurel wreath has sustained itself through British youth culture over the years. The Classic coloured polo shirts, with matching or opposing coloured log & collar stripes have endured through the decades, finding favour with Skinheads, rude boys, mods and indie kids. Still completely at home with a more modern athleisure look, but also emanating a classic style beneath braces, a parka or sharp-suit.

The player: Of lesser prowess on court that our other Tennis trend-setters. Sergio Tacchini playing career did not reach the heights of the likes of Perry and Borg, but nevertheless, he was certainly no slouch between the tramlines.
Winning the 1960 Italian championship in singles, two national doubles trophies and a string of Davis cup appearances make his CV an impressive one.

The brand: Sergio Tachinni track tops became a UK youth style essential in the 1980’s, winning real favour in football youth culture of the time. The ‘terrace casual’ look remains hugely influential with menswear designers to this date with the likes of Stone Island & North Sails taking up the gauntlet.

The player: The Swedish Tennis sensation and legend that is Bjön Borg, won an amazing 11 grand-slams. Historically, seen by many as the best men’s player of all time (we’re talking pre-Federer, Nadal & Djokovic), Borg scooped 5 Wimbledon titles, and all while oozing his own-brand of Nordic calm and coolness, before suddenly quitting pro-tennis at 26.

The brand: Ever the non-traditionalist, Borg has taken a slightly different route into thew world of men’s fashion. Opting for a more intimate direction that that of the streetwear avenue trodden by his ex-pro fashionista forebears.
Today Borg’s bold and hip under-crackers are massive is his homeland, and more recently the range has expanded to include a outer garments such as Jackets and hoodies for both men and women.

Squeezing the best from affordable fashion